Soccer struggles now to compete with the NBL and WBBL during summer. Imagine going up against the AFL and NRL and even Rugby Union in winter.

Australia's players union and a leading broadcast rights expert have urged the A-League to properly explore the feasibility of a radical switch back to winter that would put it head-to-head with the AFL and NRL.

Thirty years after the idea of summer soccer was first raised by revered journalist and FFA hall of famer Andrew Dettre, there is a growing belief within some sections of the game that it may be better off taking on the bigger codes rather than trying to avoid them. 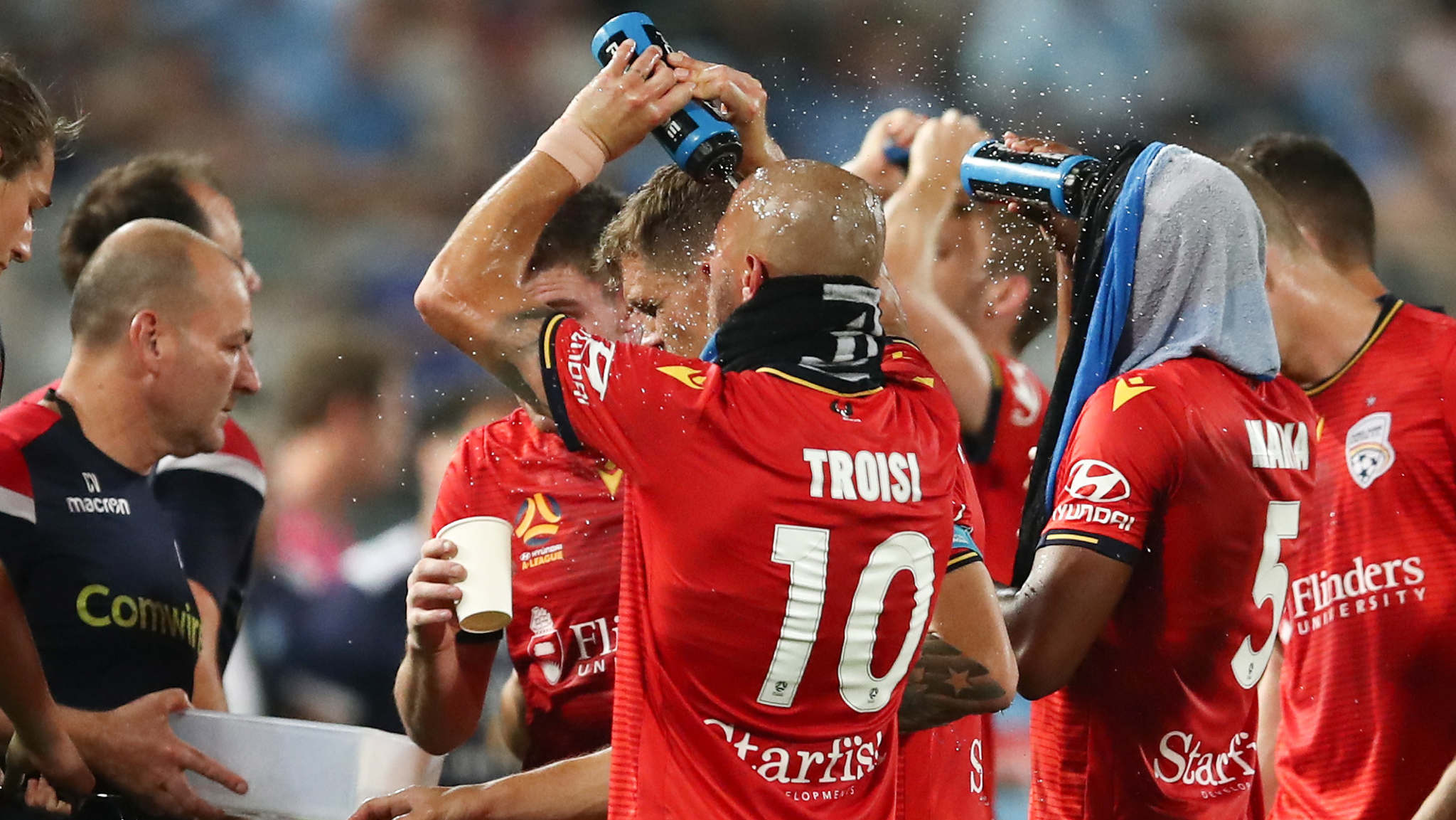 Adelaide players take a drinks break during the match with Sydney FC on Saturday night. CREDIT:AAP

Several W-League and youth league matches have been postponed or cancelled this season as a result of sweltering heat or smoke haze, while A-League players have long complained about the fatigue of playing through summer and the impact it has on the standard of matches.

The effects of a particularly brutal Australian summer and the prospect of even hotter seasons to come as a consequence of climate change have put the debate into even sharper focus.

A winter calendar would align the A-League not only with Asian leagues but the state-based competitions throughout Australia, removing one of the major obstacles to the ultimate goal of a top-to-bottom football pyramid with promotion and relegation.

It would also present a raft of significant challenges, not least the availability of stadia during AFL, NRL and Super Rugby season, and the prospect of being drowned out in media space by rival sports. Those are the chief reasons why a switch is not on the A-League's radar and viewed as completely unworkable by FFA, as well as the fact that current broadcasters Fox Sports would almost certainly not be supportive.

But with the A-League's television ratings and attendances on a concerning downward trajectory, and the competition failing to capitalise on the "clear air"of summer, the time is nigh for some "out-of-the-box thinking" and research, according to broadcast rights advisor Colin Smith.

"You're being swamped as it is," Smith, the head of consultancy Global Media & Sports, told the Herald.

"Where 12 months ago I would have said definitively 'no, that's the craziest thing they could do', because of the shape it's in now, it is time to rethink things."

Smith, who has brokered numerous deals between broadcasters and sports for over 20 years, believes it could be that European leagues in England, Spain and Italy are the A-League's biggest competitor for viewership and fan engagement, not the AFL or NRL.

"Right now, as a broadcast, fan engagement product, the A-League is probably the worst its been since its inception," Smith said.

"If I was the A-League, I'd think it's time to do a really detailed and comprehensive analysis of the business case [for playing in winter] and it's something I'd be talking to broadcasters about.

"It could be then attractive to an Optus to then say, 'wow, that means we can actually have wall-to-wall football 12 months of the year, we become the home of football in Australia'." 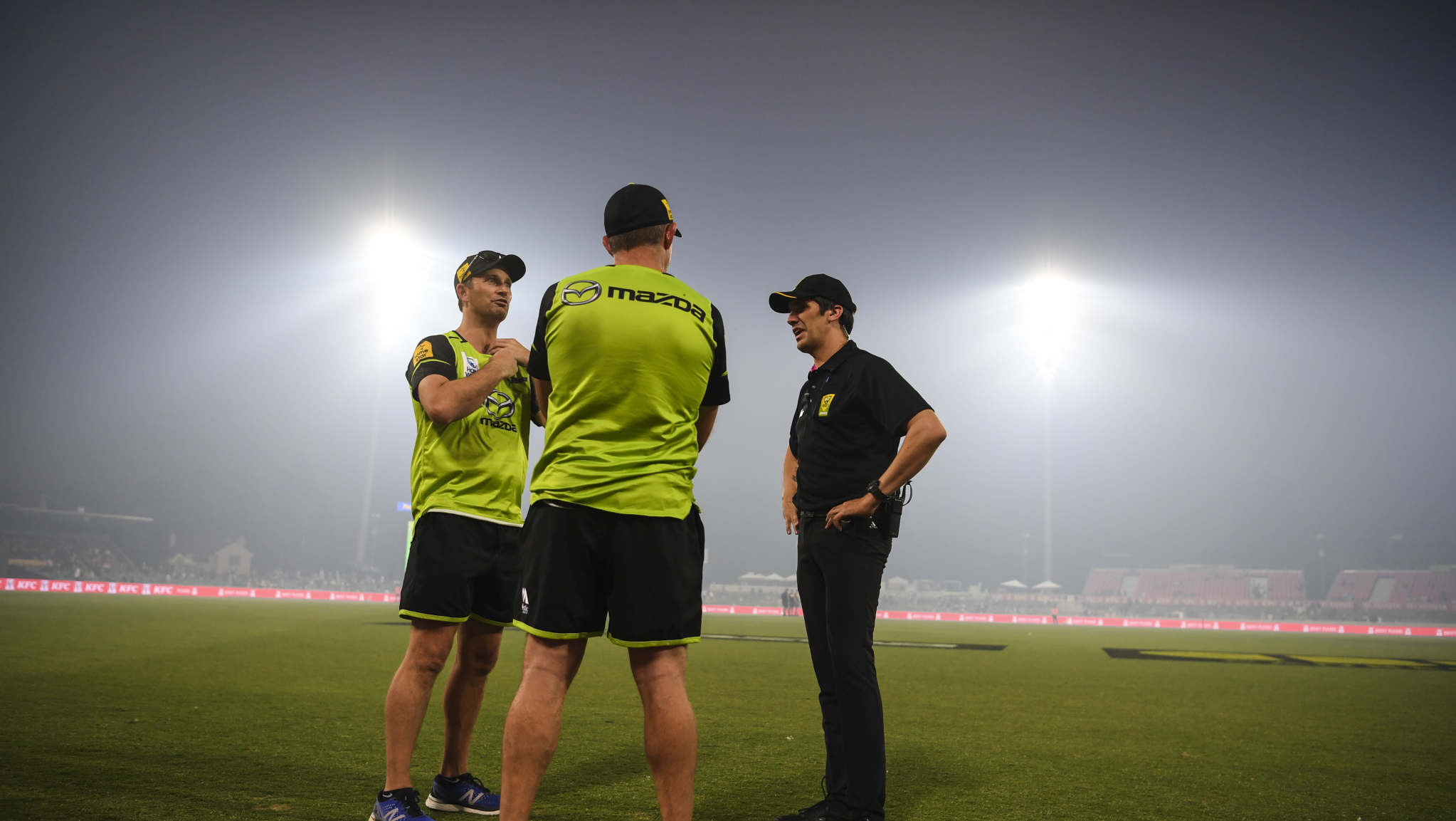 Officials called off a Big Bash League cricket match after Manuka Oval was engulfed in smoke in Canberra last month.CREDIT:AAP

Professional Footballers Australia chief executive John Didulica is also supportive of broaching what he said was an "incredibly complex" topic.

The old National Soccer League switched to summer for the 1989-90 season, primarily to escape the long shadows of the AFL and NRL – a decision Didulica said has largely proved to be incredibly successful.

Didulica acknowledged a move back to winter would have profound implications for grassroots football and facilities access, but he said no long-term plan for the sport would be complete without a thorough examination of which is the most optimal season window for football.

"These are the discussions we need to have," Didulica said. "The broadcast deal's up in 2023. The question is whether it gets tied into a bigger discussion around the integration of our football vision.

"Ultimately, we want to be selling our best product. That's the way to maximise value. If we're looking ahead 15, 20, 30 years, are we putting ourselves in a position where it's impossible to deliver a product of requisite quality as well as managing player welfare issues?

"With so many other things in flux, I think it's a really timely opportunity to reset and discuss everything. There should be no policy matter that can't be revisited over the next two or three years."

The current A-League regulations allow for games to be moved when forecasts exceed a prescribed "Wet Bulb Globe Temperature" reading, but players and fans often complain that the threshold is too high.

"You make a couple of runs and you just feel out of breath. Things that you think maybe you could normally get to or you feel like you could be in the right position, you're just maybe not there.

"To be honest, it is tough. Whether [the answer is] scheduling games on a different day or even a time change, I'm not sure, but today it was really tough."

Lol
They're in deep Doo Doo

if they do return to WINTER>>

it would be a massacre..

Crowd figures would halve
return to NSL within the next few years..

it would be a massacre..

Crowd figures would halve
return to NSL within the next few years..

Some suggest that is fast approaching anyway.

I actually preferred the NSL competition.. Had a lot more passion for the teams.

there is a few clubs carrying the A League,
without them NSL would be here already.