The state of the vicderpian game in Sydney

Which is the best football code? Here you can have it out with other football fans.
Post Reply
36 posts

if people don't know who some singlet wearing unco , noodle armed wankers are , they're ignorant

Emojis are your friend, and you need all the friends you can get.

i could have one friend , & I'd have one more then you

There are lies, damn lies and then there are ratings.
Rugby league, Australias most popular game in most of North Eastern Australia.

Emojis are your friend, and you need all the friends you can get.

i could have one friend , & I'd have one more then you

looked back at one of your posts eh ?

Has Buddy For the Swans been a 10 year success or not..

going by the numbers.

Crowds Up
Memberships up
since his arrival.

going by the numbers.

Crowds Up
Memberships up
since his arrival.

Buddy repaid his $10 million deal many, many years ago. In fact within his first season at the Swans with a massive increase in membership, sponsorship and tv ratings reported at the time. I hope the Swans and Bud can come to an agreement to see him finish his career in Sydney. Absolute champion and legend of the game.

See the following article from 2014.

$10 million? Sydney Swans have got value for money with Lance Franklin
By Samantha Lane
September 27, 2014 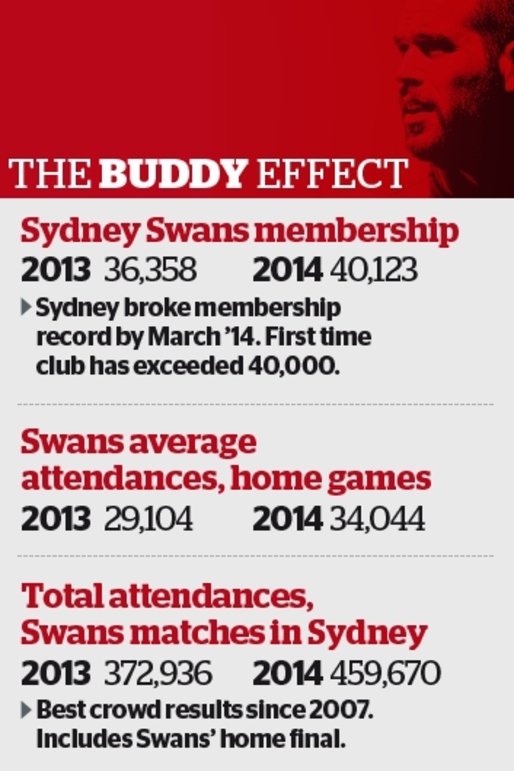 With Sydney media giving the impression of barracking for a slip from this champion AFL poster boy, Franklin delivered early.     In March, his luxury car was crashed by a teammate, Dan Hannebery. Never mind that Franklin wasn't in the vehicle at the time, the wheels belonged to Buddy. 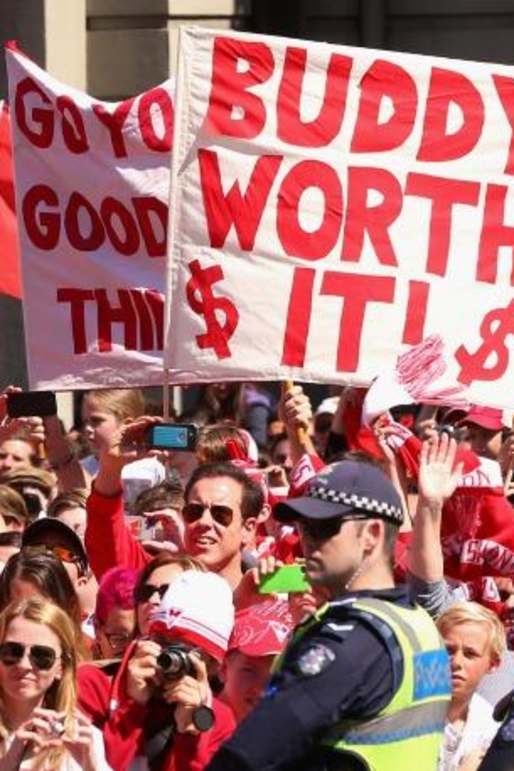 The fans are certainly convinced that Buddy is worth what he is being paid. as this banner at Friday's grand final parade shows.
CREDIT:GETTY IMAGES

Soon after came the paparazzi shots of Franklin's interaction with some bikini-clad babes on a beach. Not entirely unusual behaviour for a 27-year-old man living in Sydney, butthe tabloid headlines shrieked: BUDDY AND JESINTA CAMPBELL'S HOT RELATIONSHIP MUST BE ON ICE!

In April, it was national news when Franklin was in a bingle. In this instance, he was behind the wheel of his model girlfriend's car. Snap. Picture. Boom. Story. Story after story, after story.     With Franklin all of five games into his new football life, some of the AFL's most influential commentators were claiming Franklin had poisoned - or was at least seriously threatening to infect - the Swans' celebrated team-first, second and third culture.

Sydney, apparently, had made a $10 million mistake.     Yet almost precisely from that point, the Swans began what became a club record-equalling 12-match winning streak. Franklin played in 11 of those games and booted 40 goals.

Fast forward, and Sydney is in its fourth grand final in 10 years. Last Friday week, Franklin and Sonny Bill Williams were page one men in Sydney's NRL-dominated, News Limited tabloid.

On Monday, Franklin was featured in the same money spot alone.  In Sydney, this is unheard of for an AFL player who is only news because he is good news.   Even more importantly, though clearly not unrelated, is the fact there is not a bad news story in the metrics the Swans use to measure their commercial performance.

In Franklin's first year wearing red and white, the club has signed a record number of members - reaching and exceeding 40,000 for the first time. On grand final eve, Roy Morgan circulated study findings showing Sydney, for a ninth consecutive year, was the AFL's "most widely supported club". Not only that, but with the Swans having 1.135 million supporters, the survey said there was daylight between the competition leader and next best, Collingwood, with 739,000. The figures, measured in the period July 2013-June 2014, had this year's other grand final combatant, Hawthorn, ranked 10th with 448,000 supporters.

Attendances for Swans games in Sydney have been better this season than they've been since 2007. The club's sponsorship numbers are also at record levels, merchandise sales are up, and no prizes for guessing which player's jumper sells most.

Since Franklin joined Sydney, television audiences for Swans' games have also grown considerably - by an estimated 20 per cent on free-to-air and pay tv combined. This ranks the club in the top five most watched in the competition; a powerful position given negotiations for the AFL's next broadcast deal will soon intensify.     Sydney's new chairman, Andrew Pridham, says he talks and thinks a lot about these kinds of things, and how the Franklin factor figures in them.

"Everything we track closely, it's all at all-time highs," he said this week.

"The Buddy factor is all about the water-cooler talk. He is transcending the actual game now," says Lewis Martin, the general manager of Channel 7 Melbourne. "Buddy Franklin is a star in every sense of the word."

Those who handle Franklin's appearances - media, corporate, sporting, charitable and otherwise - did not even want to estimate the number of advances they've had since Franklin relocated. Celebrity manager Sharon Finnigan, who recently took over Franklin's affairs from AFL agent Liam Pickering, told Fairfax Media she was too busy this week to talk about that juggling exercise.

Further inquiry elicited a written response from Finnigan's assistant: "Off the field Lance's popularity has continued to grow since his move to Sydney. With that we receive countless requests from both the corporate sector, and many community groups, hoping to work with him."

Finnigan also manages Campbell, a former Miss Universe Australia whose partnership with Franklin only enhances the marketability of the pair.

Franklin and Campbell have 756,446 followers between them on Instagram and Twitter. Imagine the scope for further interest if the duo can post themselves cuddling each other and a premiership cup by Saturday night.

Exactly how much the allure of Franklin has added to the soaring allure of the Swans is impossible to say because there are intangibles that Pridham describes as the   "excitement factor" and "the vibe" that has grown throughout the year. The glitterati has returned in force to Swans games and events, and when former Australian prime minister Bob Hawke was among the notables one week he had a specific request: to meet Franklin and Adam Goodes.

"Movie and TV personalities and singers turning up to games, that goes up and down year to year," Pridham says.   "But it's definitely at the highest level it's been since 'Plugger' [Tony Lockett] was around.

"Some of it will be the Buddy factor; more will be because we're just playing well as a team."

Sydney, as a city, is indeed famous for loving a winner and, to put it Sydney-style, the Swans are so hot right now.

No doubt, Buddy has been tremendous value, worth ever $ dollar .
Will he stay or will he go ?
Big shoes to fill for his replacement.
Is dusty up to the task of it pans out that way ?

well it is no doubt been a successful ride