Which is the best football code? Here you can have it out with other football fans.
Post Reply
3473 posts

ah, here's the "our traffic and transport are so bad" excuse. Another classic

Funny how the Storm have Melbourne's transport and traffic yet have lower crowds than every AFL club in Melbourne, while the Swans have Sydney's traffic but have better crowd averages than every NRL club in Sydney.

There goes your but but but theory

laughing at you lot actually, no screaming involved

It must be tough to comprehend for you northerners.

.you need to get out of the bubble a bit more
Map of the afl world

Ha Ha. Good one crap!
I am however going to heed your advice.
Like your mate ke, i'm soon to be off to Europe for a month.

ThomasCrapper. Flushing toilet inventor.
When I hear the word Crap/Crapper I don't think"steaming pile of shit"but rather something designed with a primary function of handling steaming piles of shit.
A KindOfShitMachine.
Maybe you will too now.

Carlton have announced that they will upgrade each of their 2018 club members for next season for free as a token of appreciation for enduring yet another terrible season this year.

With one game left in 2018, the Blues are already assured of their fifth wooden spoon in 17 years and are on track for their worst ever season.

Carlton CEO Cain Liddle said the campaign was designed to send a “heartfelt” thanks to the club’s 56,005 members

Metho madness.
Lol $10 NRL tickets.$10 NRL tickets .How pathetic is that ?
Crickets chirping after I post $5 AFlol tickets .
Self ownage ..no one does it better .

This is what gets me about Memberships... they are so flaud in so many ways..

An AFL club had a shocking year now memberships are given away for free...

and this is all the media attention it gets, i wonder what 5k-10k members would get. #GWS

Carlton arent giving away memberships for free. They are upgrading them.

The_Wookie wrote: ↑
Sat Oct 13, 2018 8:50 am
Carlton arent giving away memberships for free. They are upgrading them.

fair enough, the article of the news did not give much attention to detail...

what kinda upgrades are we talking about..

The_Wookie wrote: ↑
Sat Oct 13, 2018 8:50 am
Carlton arent giving away memberships for free. They are upgrading them.

fair enough, the article of the news did not give much attention to detail...

what kinda upgrades are we talking about..

Looks like a smoke and mirrors marketing ploy to me. You get an 'upgrade' if you sign up before 31 Jan 2019. It doesn't state what the upgrade will be. Probably an extra bumper sticker or key ring.

ahhh i see.. yeah could be anything...

As it stands: 77,504 (includes digital memberships)

After reaching the big dance in 2017, last season was a nightmare on and off the field. But with that firmly behind them, there is still plenty of excitement about the Crows. In fact, the club is at capacity for reserved seating memberships at Adelaide Oval, offering digital memberships as another option which can provide access to buy tickets.

The Lions haven’t registered more than 30,000 members since the year after they completed a phenomenal three-peat under Leigh Matthews. But two years into the Chris Fagan realignment, Brisbane is a team on the rise, with ball magnet Lachie Neale and monster full back Marcus Adams added over the off-season.

Just when there was a groundswell of optimism surrounding Carlton, they were hit by a handful of injuries before Christmas. They have lost new co-captain Sam Docherty for next season, Jarrod Pickett for a fair chunk and even new recruit Mitch McGovern went down before the break. But they do have the No. 1 pick in Sam Walsh and one of the best midfielders in the competition in Patrick Cripps, so it is not all doom and gloom at Princes Park.

Following a year where they stunned the competition by rising from 13th to the final game of the season, Collingwood acquired former premiership midfielder Dayne Beams, four years after he headed north in the deal that landed Jordan De Goey, Jack Crisp and Levi Greenwood. With so many stars across the park, they will be a marquee drawcard in 2019.

12 months after landing Devon Smith, Jake Stringer and Adam Saad, Adrian Dodoro went back to the well in October, this time luring Greater Western Sydney star Dylan Shiel south, away from the clutches of Carlton, St Kilda and Hawthorn. After winning 10 of its final 14 games last season, the Bombers could do anything next year. But they haven’t won a final since 2004...

Finally, after trying for many years to reel in a key forward, the Dockers got one in October. And not just anyone, Jesse Hogan. Fremantle have spent the past few years right down the bottom of the ladder, but after landing the star spearhead, as well as Greater Western Sydney tall forward-ruckman Rory Lobb, there is reason for optimism in Perth. Even if Lachie Neale moved to the Lions.

Chris Scott’s side appeared capable of anything at the start of last season, but failed to deliver when it mattered most. Despite the presence of the ‘Holy Trinity’, Geelong didn’t get past the first week of September. While they held onto Tim Kelly — at least for now — in October, Gary Ablett, Joel Selwood and Tom Hawkins aren’t getting any younger.

When you lose your two best players — and leaders — it makes it extremely difficult to bring people through the gates. And when you have failed to win games for the duration of your existence, it makes it even harder. But after recruiting three of the best players in the draft — Jack Lukosius, Izak Rankine and Ben King — things might improve very quickly.

Just when the Giants look poised to strike in 2018, they hardly made an impact. Now they have lost a handful of their best players — Dylan Shiel, Tom Scully and Rory Lobb — and their window appears to be closing. But despite the big name departures, Leon Cameron still has plenty of Ferraris in his garage.

Hawthorn may have departed September in straight sets, but they didn’t mess around in October. They sold the farm to bring in dual All-Australian Chad Wingard and paid peanuts for Tom Scully. With Brownlow medallist Tom Mitchell and star midfielder Jaeger O’Meara yet to play in a winning final in brown and gold, the Hawks will be out to make an impact when it matters in 2019.

If you weren’t already excited by what Melbourne achieved in 2018, then their work during the trade period should have provided another boost. They added star defender Steven May to a backline that will include Jake Lever at some point next year, along with 2013 Pick 5 Kade Kolodjashnij and ruck security in Braydon Preuss. And then they have one of, if not the best engine rooms in the AFL.

North Melbourne might have missed out on landing West Coast star Andrew Gaff, but they still reeled in some outside class in October. They brought in Port Adelaide wingman Jared Polec and half-back Jasper Pittard, as well as Gold Coast game breaker Aaron Hall, while also adding Demons midfielder Dom Tyson. Brad Scott’s side faded last season but showed there is still plenty to work with Arden Street.

While many are still coming to terms with Port Adelaide’s late season nose dive, they have heavily invested in the draft this year. They selected Connor Rozee (Pick 5), Zak Butters (Pick 12) and Xavier Duursma (Pick 18), after landing West Coast premiership ruckman Scott Lycett during the trade period. So there will be plenty of reasons to be interested in the Power next year.

It is still hard to believe a side already stacked full of superstars could squeeze another one in, but they did. And while they failed dramatically on the penultimate weekend of the season, they will have one of the premier forwards in the land in Tom Lynch next season, playing alongside reigning Coleman medallist Jack Riewoldt. Going back to back is very difficult in this competition, so watch Richmond roar again in 2019.

After moving in a gradual upward trajectory, 2018 did not go to plan at all. Now the Saints might have undone some of the faith they had rebuilt at the beginning of the Alan Richardson era. The arrival of three-time All-Australian Dan Hannebery and Pick 4 Max King has boosted the excitement levels, but St Kilda will be up against it next season.

While they still have Lance Franklin terrorising opposition defenders, the Swans are still capable of plenty. He is still the biggest drawcard in the game. But after falling at the first hurdle in September, the Swans aren’t quite as attractive as they once were, especially in a fickle market like Sydney.

After reaching the 80,000 barrier during their premiership-winning 2018, anything is possible for West Coast in 2019, including something in five figures. They held onto the best wingman in the AFL, play at the loudest stadium in the land and should get Nic Naitanui back at some stage next season, making the Eagles a must see team in 2019.m Now, can they go back-to-back?

It is hard to believe where they were two years ago. But now, after missing out on the finals for the past two years, the Western Bulldogs aren’t as attractive as they once were. Plenty of premiership players are gone, but they still have one of the premier midfielders in the AFL in Marcus Bontempelli and will get Tom Liberatore back next year.

Look at those titans killing it 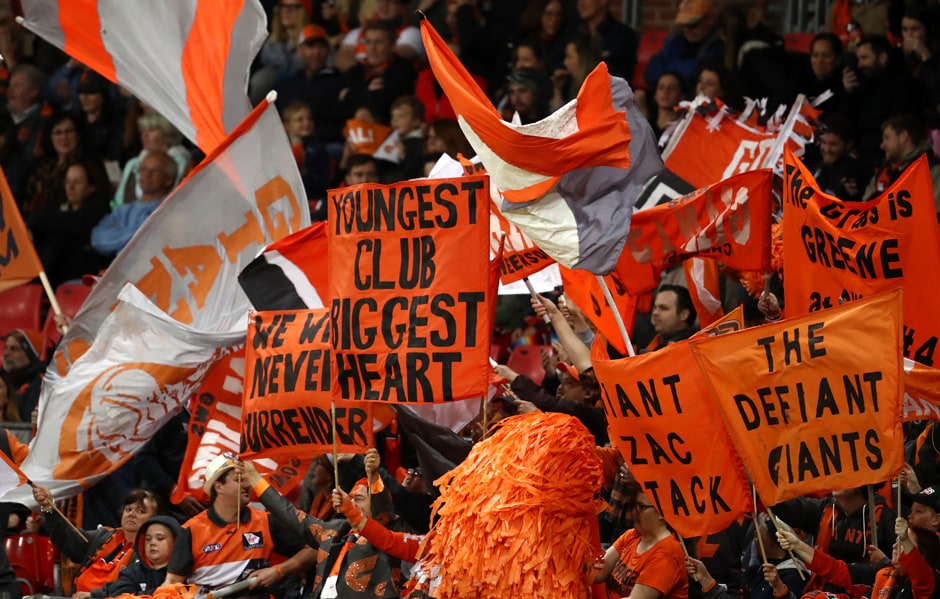 The GIANTS have surged past 20,000 members a week out from the 2019 Toyota AFL Season starting.

Just a week out from the blockbuster season opener against Essendon at Sydney Showground Stadium, the GIANTS have passed 20,000 members on the way to another record membership tally in 2019.

Before the ball has even bounced for the 2019 Toyota AFL Premiership season, the GIANTS are proud to announce that the club is on the way to smashing the previous membership record of 25,243.