Which is the best football code? Here you can have it out with other football fans.
Post Reply
3517 posts

leeroy*NRL* wrote: ↑Mon Mar 30, 2020 12:04 pm been a few clubs asking supporters to Support club throughout this time to stick by memberships.
while also stating you can ask for a refund.

Gees.
anyone know how much clubs make from Memberships per year..
I assume the AFL would be triple the NRL's

the AFL clubs make a shit ton out of memberships, several of the nrl clubs make less than GWS!

*yes you really can't make this shit up either

You can make shit up you're an expert
You do it all the time
Numbers for all clubs were available more than 3 weeks ago
But don't let that stand in the way of your compulsive lying .

leeroy*NRL* wrote: ↑Mon Mar 30, 2020 12:04 pm been a few clubs asking supporters to Support club throughout this time to stick by memberships.
while also stating you can ask for a refund.

Gees.
anyone know how much clubs make from Memberships per year..
I assume the AFL would be triple the NRL's

the AFL clubs make a shit ton out of memberships, several of the nrl clubs make less than GWS!

*yes you really can't make this shit up either

You can make shit up you're an expert
You do it all the time
Numbers for all clubs were available more than 3 weeks ago
But don't let that stand in the way of your compulsive lying .

I know the nrlol make shit money from their memberships crapbot. but try getting your nurse to help with the reading

Leagueiscrap
and she still changes your nappies as well!
pusseycat replys
Only when I have an accident.

Some very good news this season in these uncertain times. The loyalty of AFL fans is truly amazing.

AFL fans to the rescue
By Caroline Wilson
August 7, 2020

When AFL transmission ceased in late March and 80 per cent of club and league staff were sent home for two months - and some much longer - Collingwood president Eddie McGuire further invoked the depression gloom by warning of the dire consequences of a run on club memberships.

McGuire's strong language played out behind the scenes. Geelong boss Brian Cook was less pessimistic than some but the Cats, with pre-COVID membership revenue set around $14 million for 2020, budgeted for one-third of their members to request refunds.

The AFL pre-empted the clubs' cash crisis when it secured a $500 million line of credit from two major banks partly due to the expectation that members and sponsors would be forced to desert their teams as job losses mounted and the prospect of a season with empty stadia loomed.

A sub-committee of club chiefs focusing solely on memberships looked at the prospect of tax breaks as one solution to stem the bleeding. "Connection" became the buzzword as every club searched for ways to engage their supporters in the absence of their raison d'etre - football.

Yet their pessimism proved unfounded. Despite the human tragedy of COVID-19 and the social and financial chaos which has unfolded for the competition since the pandemic started to spread in Australia, the AFL club members have stuck.

In a response described by league boss Gillon McLachlan as "amazing loyalty" and one which has surprised most clubs, only 1 per cent of members across the competition have requested refunds, albeit with significant numbers pledging their money through to 2021. 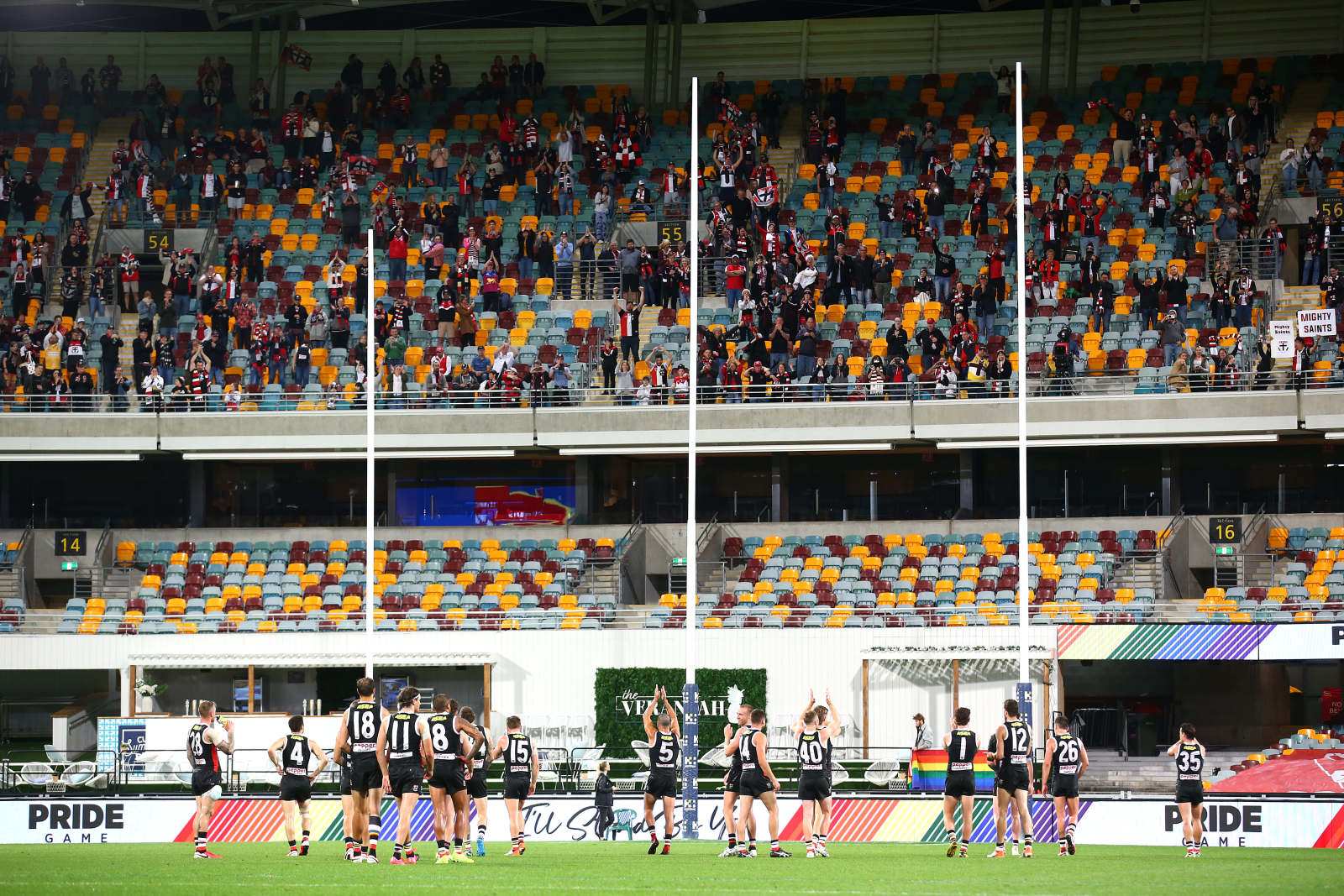 The Saints thanks fans at the Gabba after their win over the Swans.CREDIT:GETTY IMAGES

Said Geelong's Cook, who in June lifted his membership retention target from 65 per cent to 80 per cent as supporters remained and then 90 per cent: "If anyone needs a pat on the back aside from the players this year it's the members."

Carlton's Cain Liddle, whose Blues (67,000) are one of five clubs to post membership records this year, said the loyalty had not surprised him. Liddle's achievements as Richmond's membership boss in both tough and triumphant times helped him secure the Carlton job.

His intimate knowledge of club members told him there were two key reasons supporters financially pledge to their teams. "It's pretty simple,"said Liddle. "They want to support their club and they want to feel part of their club."

The loyalty of club members could be further tested with the end of JobKeeper and with the dismal prospect of further hits to the game next season, a prospect of still-empty or at least crowd-restricted stadiums in Victoria come March next year, which was raised by McLachlan at a meeting with club chiefs on Wednesday.

This year the AFL agreed to extend the membership close-off to August 31 which means, according to McLachlan, membership ladder leaders Richmond, with more than 98,000 members, could again break 100,000.

West Coast, whose membership revenues are worth an estimated $30 million to the club, have also broken their record this year and sits second on the membership table just behind the Tigers.

At last count the AFL clubs memberships totalled more than 960,000, with 9650 requesting refunds. In fact since the late March shutdown of the 2020 season, a further 30,000 new members have signed. As the monthly supporter direct debits continue to move into ailing club coffers, 15 of the 18 clubs boast more members now than when the game shut down in March.

Of the five clubs to have passed their membership records - Brisbane Lions, Carlton, Gold Coast, St Kilda and West Coast - that two of them are Victorian clubs whose members stayed loyal in the knowledge they were unlikely to attend games speaks volumes.

On-field success is not the only key to loyalty. North Melbourne (38,485) sit 15th on the ladder with just three wins but have added 1400 members since the outbreak. Club chief Ben Amarfio said he budgeted for a 40 per cent membership shortfall that never eventuated.

That North's sponsors, led by Mazda and the Spirit of Tasmania, have also remained loyal has meant the Kangaroos have not been forced to draw upon the AFL's assistance fund. In fact it has been the bigger clubs, more heavily reliant on big attendances, which have been harder hit in terms of financial expectations.

"We've learned what we sort of already knew," said Amarfio. "Club membership is not transactional it has much more to do with identity communication and clearly expanded content has become an even bigger priority."

For the Victorian clubs, which each suffered further million-dollar revenue hits after the season restart when their home games were relocated from the MCG and Marvel Stadium, the loyalty of members and sponsors has quite literally kept the cash flowing. 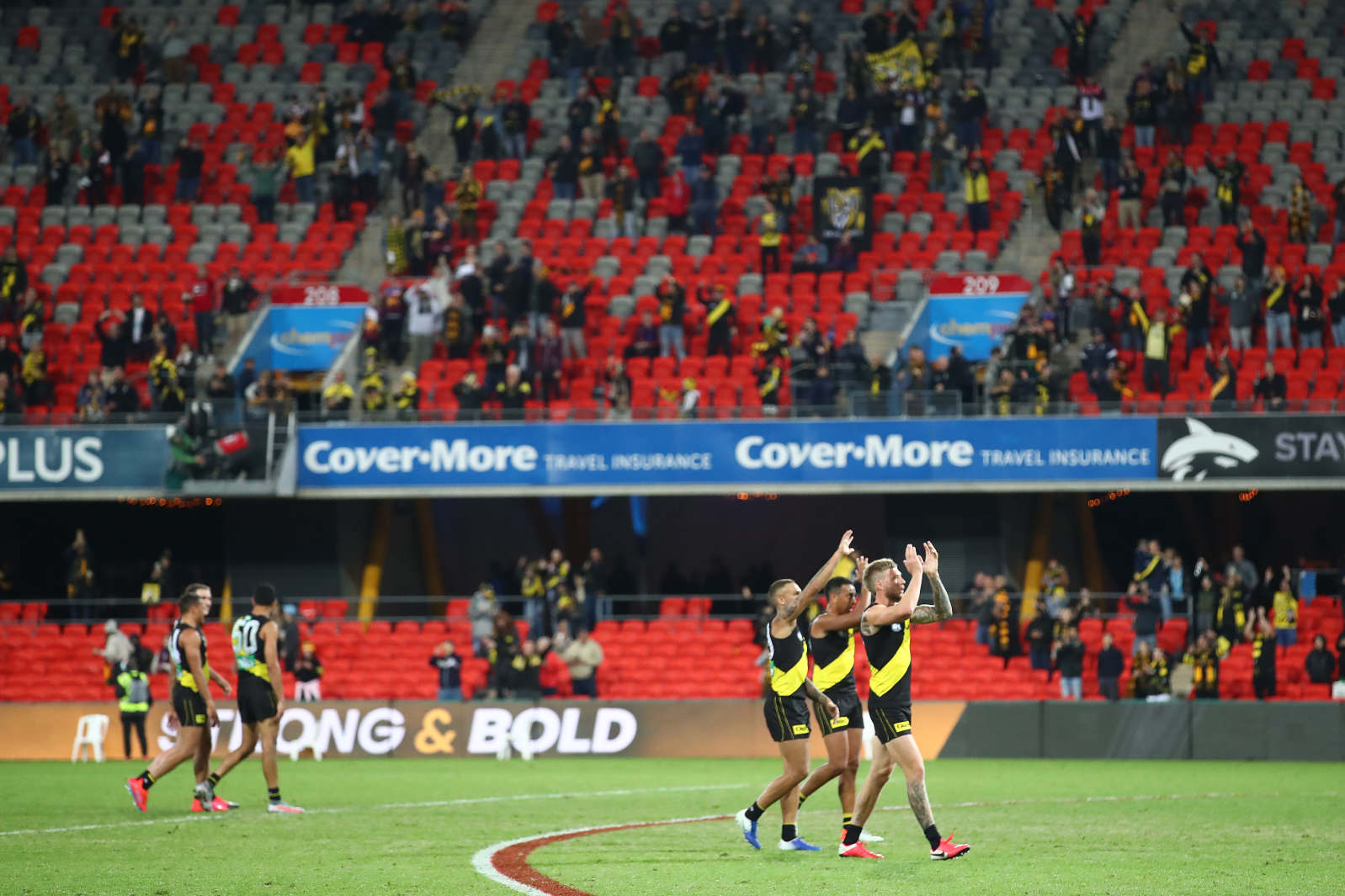 The Tigers show their appreciation at Metricon Stadium.CREDIT:GETTY IMAGES

St Kilda chief executive Matt Finnis - whose club is one of eight AFL-assisted clubs - said the loyalty of St Kilda's members had led to a significant reduction in the money the club had accessed from the AFL's assistance package.

Since the Saints announced their COVID-inspired pledge program in May, supporters have pledged a further $250,000 to the club and 4000 more members have signed up to lift the St Kilda membership to more than 47,500.

"I don't think our members have done this to help us survive," said Finnis. "They've done it because they want us to remain competitive. [Membership] means a sense of ownership more than just a season's ticket."

Essendon chief Xavier Campbell added: "One of the last things people want to lose is the thing which makes them happy." The Bombers' pledge membership campaign has rewarded those loyal supporters with a club guernsey signed by a player of their choice.

We'd all be stuffed if they didn't.
Greg Swann, Brisbane Lions

Relatively few members across the competition took up the tax incentive option to donate their membership money to a club foundation, which would have come at a cost to their clubs, but a significant number, including at St Kilda and North, have covered the cost of fellow cash-strapped members.

The Western Bulldogs membership is also up, 12 per cent ahead of 2019 with that club one of several rewarding members' loyalty not only with club merchandise but also an automatic upgrade in 2021.

Brisbane Lions chief Greg Swann said the Lions had overcome their initial despondency over the COVID-led football recession. Having been on target to achieve record numbers and big attendances with unprecedented prime-time Thursday and Friday night fixtures later abandoned due to the pandemic, the club has broken its membership record anyway and is worth some $5 million of the club's revenue.

"It just confirms how much our members feel invested in the club," said Swann. "They share part-ownership in the club and it's terrific for the competition. We'd all be stuffed if they didn't."

Gold Coast (roughly $3 million in membership revenue) are closing in on 15,500 members, passing their previous best of 14,100 in 2011, their first season. The NRL Titans by comparison have about 7900 members.

The AFL, like the Melbourne Cricket Club, has reduced its annual subscription by some 30 per cent. The MCC will offer a further 30 per cent reduction to members suffering financial hardship - and has also had a relatively small drop-off, which is remarkable given the dearth of football at the MCG and Marvel.

But to what lengths the game will go when it emerges from the COVID-19 disaster to say thank you to nearly one million supporters who continued to pledge financially to their clubs remains an agenda item to which it should be held accountable.

Carlton have already set that ball rolling as they have revisited the master plan for the club's new training and administrative facility at Ikon Park. There, according to CEO Liddle, they plan to immortalise their 2020 members by engraving the names of each one in stone.

Are these figures coming strait out of AFL house? Because I can recall previous figures shown on Wookie Twitter site on all sporting codes , and it showed a much larger percentage of AFL fans, than any other, wanted there money back.

And this pathetic attempt at re - writting history is just downright laughable.

in a simple roll over, and if you want a refund now, the clubs have given it..


Are these AFL Members getting the same deal as the NRL in a roll over effect ?

I know for the suns if you want a refund you get it.

Collingwood... they’d prefer you didn’t and are happy to work with you around a plan if need be but at the end of the day if you want your money bank you get it.

pussycat wrote: ↑Sat Aug 08, 2020 11:31 am Are these figures coming strait out of AFL house? Because I can recall previous figures shown on Wookie Twitter site on all sporting codes , and it showed a much larger percentage of AFL fans, than any other, wanted there money back.

And this pathetic attempt at re - writting history is just downright laughable.

you cant believe everything you read in a fucking survey.